I was called today by a very helpful KLM representative. He admitted that the experience I had was not one that should occur, and apologized for the inconvenience. After talking a bit about the details we were able to put this matter behind us and I am yet again a happy KLM customer. Thank you KLM for resolving this in such a nice manner.

The old blog-post as it was written previously is included below.

On the 27th of april 2014 at 12:38 I sent an email to a KLM email about a bad KLM experience I had had. The email address I used was customercare.management@klm.com and I had found it on a frequent flyer forum whilst looking for email-addresses KLM customer services could be reached on. After not getting any response or bounce on that email address I contacted @KLM on twitter and asked if the previously mentioned address was the correct address to use when contacting them by email. This dialogue followed: 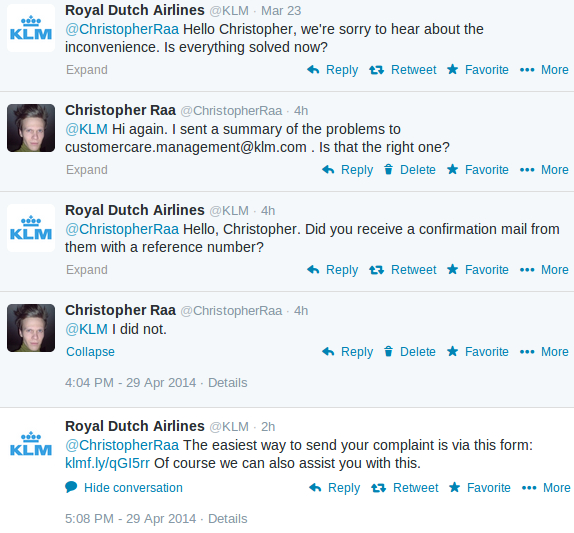 It’s great that customer service reach out on twitter, it really is. Unfortunately the answer does not help me much as the form they point to is a pain, and the process afterwards is pretty shoddy (sorry, but it is). Speaking from own experience and the experience of those close to me. It used to be much better, in the time before Accenture had their big project of ‘optimizing’ the KLM customer service experience. But I digress..

In the conversation that followed on twitter they kindly proposed they help filing a complaint via twitter. Creating 50+ tweets just to get the text over is a bit cumbersome, so in an effort to simplify things for KLM Customer Service I am posting the email in it’s entirety here. I hope this makes it more convenient. The email read as follows:

The 27th of january this year I booked a flight from Bergen to Berlin (Tegel) on the 20th of march with return on the 23rd of march. The booking code is 2X2YV4 . Upon arrival in Berlin there was some confusion as to where our luggage had been sent, and we stood waiting in a terminal building for roughly 20 minutes before being shuttled to another terminal where our luggage had been waiting all along. This was not a major inconvenience, just a little unnecessary. The reason I’m telling you this is because it is relevant later.

The time in Berlin was very enjoyable, and both my travel companion and myself quickly decided that Berlin is a city that we are going to visit again. On the last day of our visit there I got a phonecall from KLM. I’m am guessing this was a department based in India, because it was very hard to understand what the person on the other end was saying. I had to ask for clarifications quite a few times before I managed to understand what he was trying to tell me. Please do listen to the recording if you have one and are able to retrieve it.

After a little while I managed to understand that what he wanted was to put me on another flight back home, namely one that went through Oslo instead of Amsterdam. This was because the flight I was originally booked on had been overbooked. Going through Oslo (Gardermoen) is a major inconvenience when traveling since one have to collect luggage, go out through customs, go back to check-in to check in luggage, go through the security theater and then proceed to the gate. Never the less, I agreed to being rescheduled and was told there would be issued a €150 refund for the inconvenience.

Because of the luggage-issue upon arrival at Tegel I decided to be at the airport extra early for my departure, just in case Tegel is “one of those airports” where inconvenient things happen frequently. Being early is not an issue for me. When I travel I like to just relax and not having to rush back and forth. I always come prepared and with more than enough time. So on the day of departure I arrived at Tegel at 09:20 and my flight was scheduled to depart at 12:20.

I proceeded to go to the Air Berlin check-in counters since I saw that the flight I had been rebooked to was a flight operated by Air Berlin (AB 8242). After waiting in line for a little while I arrived at the counter and the checkin procedure started. Just when the boarding card was to be printed the lady behind the counter told me that there was an incorrect booking class on the ticket and that they could not go through with the check-in. I was told to go to the KLM customer service desk.

So I took my things (luggage and all) and went to the KLM customer service / ticked desk. I waited in line there for a while and when it was my turn I explained what the Air Berlin staff had told me. Your employee there told me that the Air Berlin staff was correct and that the Indian guy from the night before had indeed made an incorrect booking. He proceeded to correct the booking and told me to go back to Air Berlin to check in.

So I went back to Air Berlin and waited in an even longer line. After quite a while I reached the ticket counter and this time around the boarding cards were printed, so apparently the customer service representative had been able to fix the booking class. The Air Berlin staff then told me to pay €70 for the one suitcase I traveled with. No one had informed we about there being a need to pay for luggage, and I even had the original booking email from you (from january) which clearly states that 1 piece of carry-on luggage, and 1 piece of check-in luggage was included in the fare. I also double checked the new booking confirmation (from the night before after I had been rescheduled) and it said nothing about luggage not being included in the fare.

The Air Berlin staff was adamant in their claim that KLM had not paid Air Berlin for my luggage and that this was a case between myself and KLM. I tried making them see reason and send my luggage anyway, as the time of departure was getting close fast. I even tried going to the Air Berlin ticket counter that was very near and convince them to fix this for me. Still no luck, as they said that they could not “sponsor” KLMs operation by transporting their passengers luggage free of charge. Since this was clearly not being resolved I was told to take my luggage and go back to the KLM customer service / ticket counter.

After waiting in line at KLM for a while I explained the situation to your customer service representative, the same (very friendly) guy that had helped me earlier. He said that I did indeed have to pay the amount Air Berlin had specified. He also said he was sorry that I had not been informed about this earlier. At this point so much time had been spent going back and forth, standing in line and talking to various check-in counters and service desks that only 25 minutes were left before my flights scheduled departure. He agreed with me that there was no way I would be able to make my flight and proceeded to find me another flight. This delayed my return trip by another couple of hours.

When I went to check in, this time with SAS, there was yet another annoyance. Luggage was still not included in the ticket, but I had been informed about this by the KLM staff so I was prepared. The annoying thing was that the payment solutions at the SAS-desks were out of operation (or something along those lines) so I was told to go to the other side of the airport, find the SAS customer service counter, pay there and bring the reciept back to the check-in counter.

I did as I was told, got checked in and proceeded to go wait at the gate. Upon boarding the plane when they scanned my boarding card the scanner flashed red and they said that they could not let me board because my luggage had not been paid for. Luckily for me I had the paper reciept that proved that I had indeed paid for the luggage. A phonecall and some computer-work later the SAS representative could let me board and I was finally on my way back home.

I have attached a picture of the reciepts of the payment for the luggage and expect the total amount specified to be transfered to my bank account at DNB. My account number is .

As you can probably understand this is not at all what I want to experience when travelling and I am deeply unsatisfied with what happened. If this is what is supposed to happen when one agrees to being rebooked then I think it is truly a horrendous deal.

In addition to refunding the amount for the luggage I want you to tell me what you are going to do about the experience I have detailed in this email. This sort of trip is not what should be associated with flying KLM. I’ll be awaiting your response.

So that’s the whole thing. Hopefully it is easier for you to get this case into your customer care system from here, Feel free to contact me by email so I can send over both my bank account number and the copy of the receipt for the luggage expense.